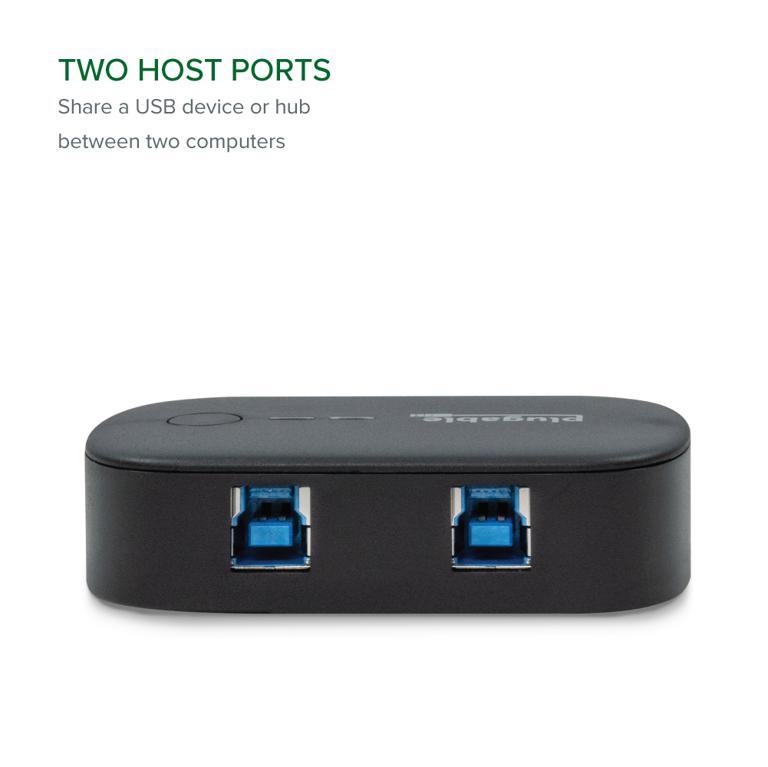 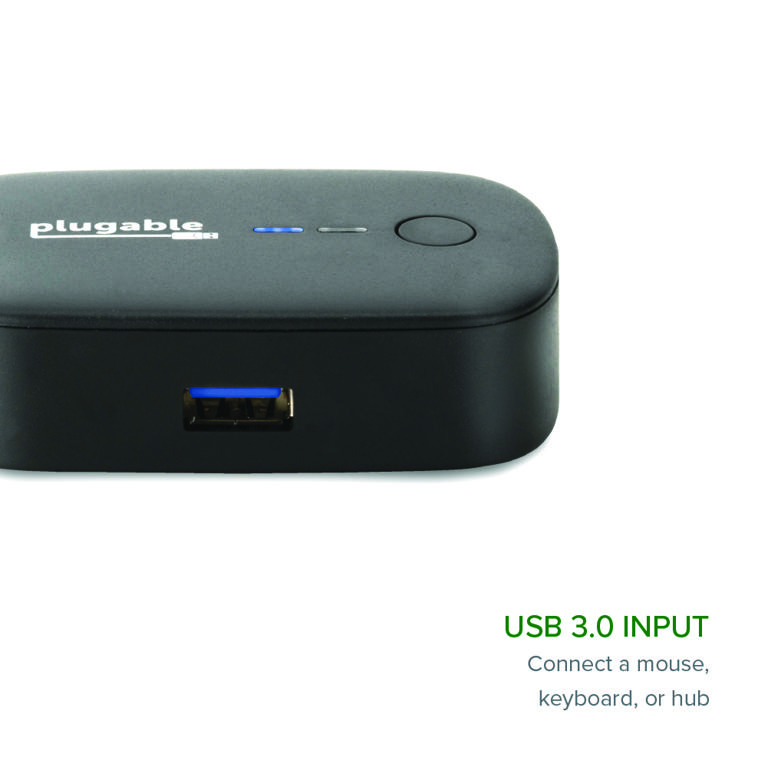 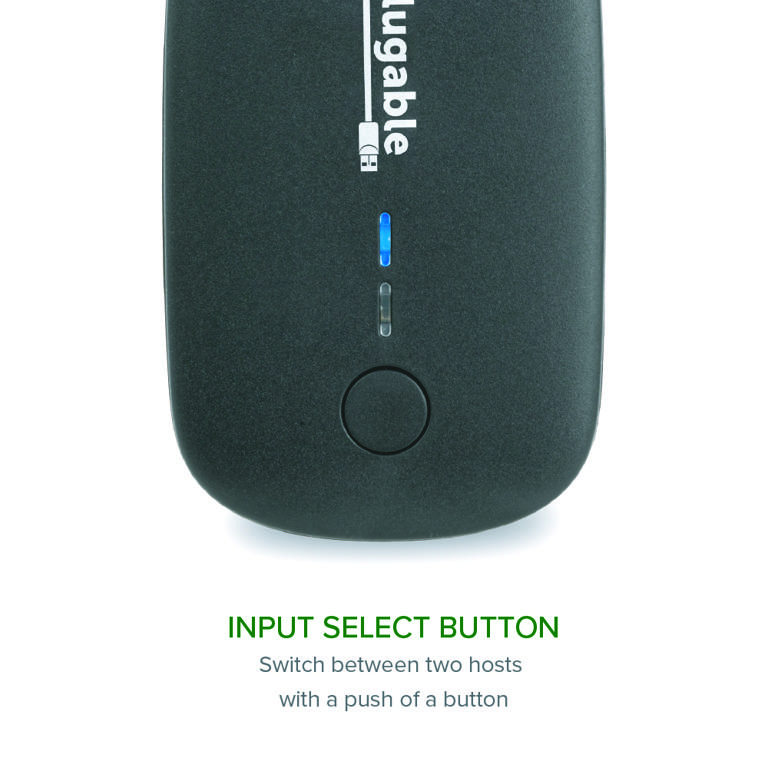 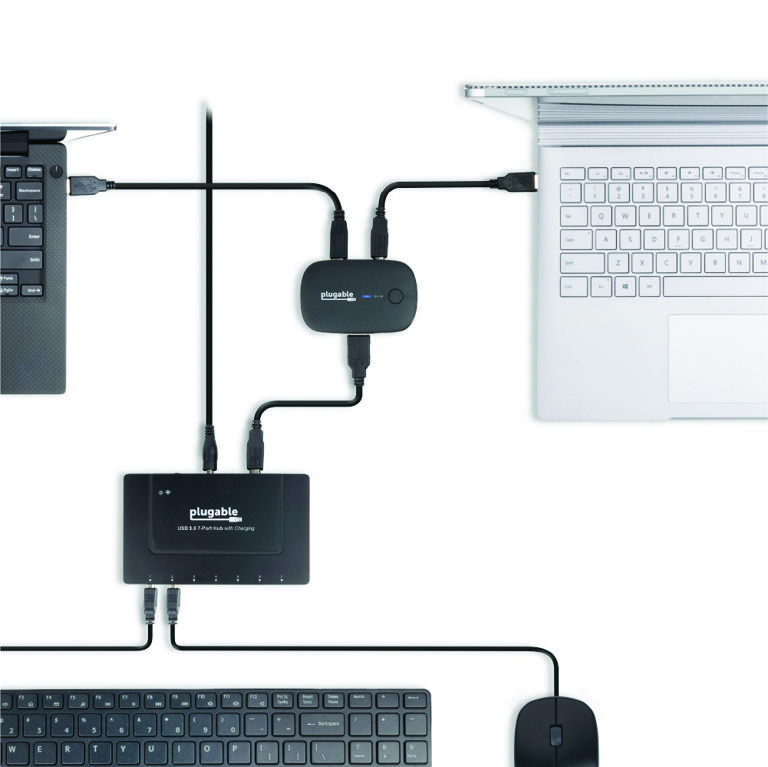 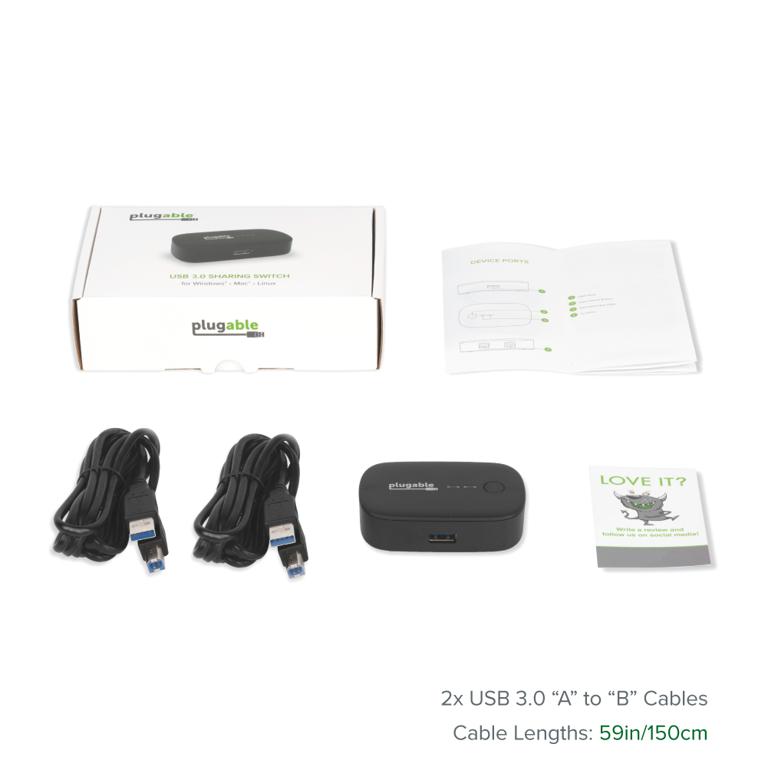 Out of Stock at Amazon.com—Sign Up for Back-in-Stock Notification
Amazon US Out of Stock) Amazon AU ($42.95 AUD) Amazon SG ($36.95 SGD)
Ingram Micro US Insight

The Plugable USB 3.0 Sharing Switch (USB3-SWITCH2) is the ideal solution for one-touch switching of access between two computers to a:

Potential To Do More

Looking to provide two-computer access to a single keyboard, mouse, and display? Just attach the switch to a powered USB hub, then connect all your desired peripherals for an all-USB KVM solution.

Just Plug In And Switch Away

Note: Because storage devices must be "Safely Removed" or "Ejected" in your computer's Operating System before disconnecting, we recommend exercising caution if using storage devices with this switch.

Questions? We're here to help! Please reach out to us at support@plugable.com

It can provide data transfer rates up to the USB 3.1 Gen 2 (10 gbps) specification depending on the host and device, but does not directly support video in the way that USB-C Alternate Mode does. This limitation makes DisplayLink USB graphics adapters and docking stations ideal on systems that do not have USB-C, or in instances where more displays are needed beyond available video outputs of a PC.

This type of connection comes in a couple different styles depending on whether USB 3.0 and higher transfer rates are supported (bottom graphic). Usually this type of connection is used to plug into USB devices that do not have a fixed cable connected, such as USB docking stations, USB hubs, printers, and others.

One of the first connectors for charging a smartphone, wireless game controller (such as the Sixaxis and DualShock 3), and other small devices such as external hard drives. Not commonly used today, but is still used in some cases. Most devices using USB Mini B are using USB 2.0, though a USB 3.0 variant does exist. This specification also added USB On-The-Go (OTG) functionality, though it is more commonly implemented with Micro USB.

A smaller connector that serves many of the same uses as the Mini B connector, with added optional features such as Mobile High-Definition Link (MHL) to allow devices like smartphones to output video to larger displays without requiring a dedicated port for video output.

The larger variant of USB-B is most commonly used for external hard drives for higher 5Gbps transfer rates.

The most recent USB connection, USB Type-C (USB-C), represents a major change in what USB can do. The connector is smaller, can be connected in two orientations, is able to carry substantially more power and data, and can directly carry video signals of multiple types (HDMI, DisplayPort, etc.) Intel has also adapted the USB-C connector for use with Thunderbolt 3 and Thunderbolt 4.

More details regarding physical USB connections can be found on Wikipedia . The graphics depicted here are adapted from Wikimedia Commons by various artists under the Creative Commons Attribution-Share Alike 3.0 Unported license.

Why Is This Switch Is Not Recommended for Use With Hard Drives, Flash Drives, or Other Storage Devices?

When the button on the switch is pressed, the net effect is essentially the same as if you were to unplug the storage device from one system, and then plug it into the other. As such, the same same storage removal precautions and “best practices” must be followed to minimize the risk of data loss or corruption.

A bit of additional background may help to clarify this recommendation further. To access data on any storage device, the file system must be “mounted” by the operating system. (This is the process that results in the user seeing a corresponding drive letter for the device in Windows.) If the device is disconnected or loses power without going through the proper unmounting/ejection process, data corruption can sometimes occur. This potential data corruption is why Windows performs a lengthy chkdsk (“check disk”) process when booting back up after a power failure or a crash, and it’s the same reason you see Windows pestering you to “check the drive for errors” when you insert a flash drive that was not properly ejected.

However, if you still wish to use a storage device with the switch, there are two potential methods of doing so while drastically reducing the risk of data corruption:

Method 1: “Eject” the device from within your Operating System prior to switching control of the device. This is the suggested procedure to perform prior to removing/switching any storage device from your system. The process for doing so varies depending which OS you are using.

Method 2: (Windows Only) Enable the “Quick removal” setting for your storage device inside your operating system. Windows 7 (and later) will often implement this setting by default on devices that it detects as portable, but it is wise to confirm that this setting is enabled. Please note that while this setting reduces the risk of corruption somewhat, it is not as effective as the steps outlined in Method 1 above.

Can I Use USB 3.0 Cables Longer Than the 1.5m Cables Included With the Switch?

USB 3.0 “Super Speed” transfers are very sensitive to attenuation and interference, and these problems can become more pronounced in situations where longer cables are used. We suggest avoiding longer cables for best results and using the 1.5m cables that are included.

I’m Having Problems With My USB 3.0 Dock or Hub That Connected to the USB 3.0 Switch

With more devices connected in the "chain", we'll want to start by better isolating where the problem could lie.

These questions should hopefully help you isolate and understand where the issues could lie. Please contact us at support@plugable.com for more assistance, along with a copy of the answers to the above questions to assist in troubleshooting and we'd be glad to help further.

Can I Use the USB 3.0 Sharing Switch With a USB-C Dock or Hub?

Plugable does not currently offer a USB-C sharing switch at this time. 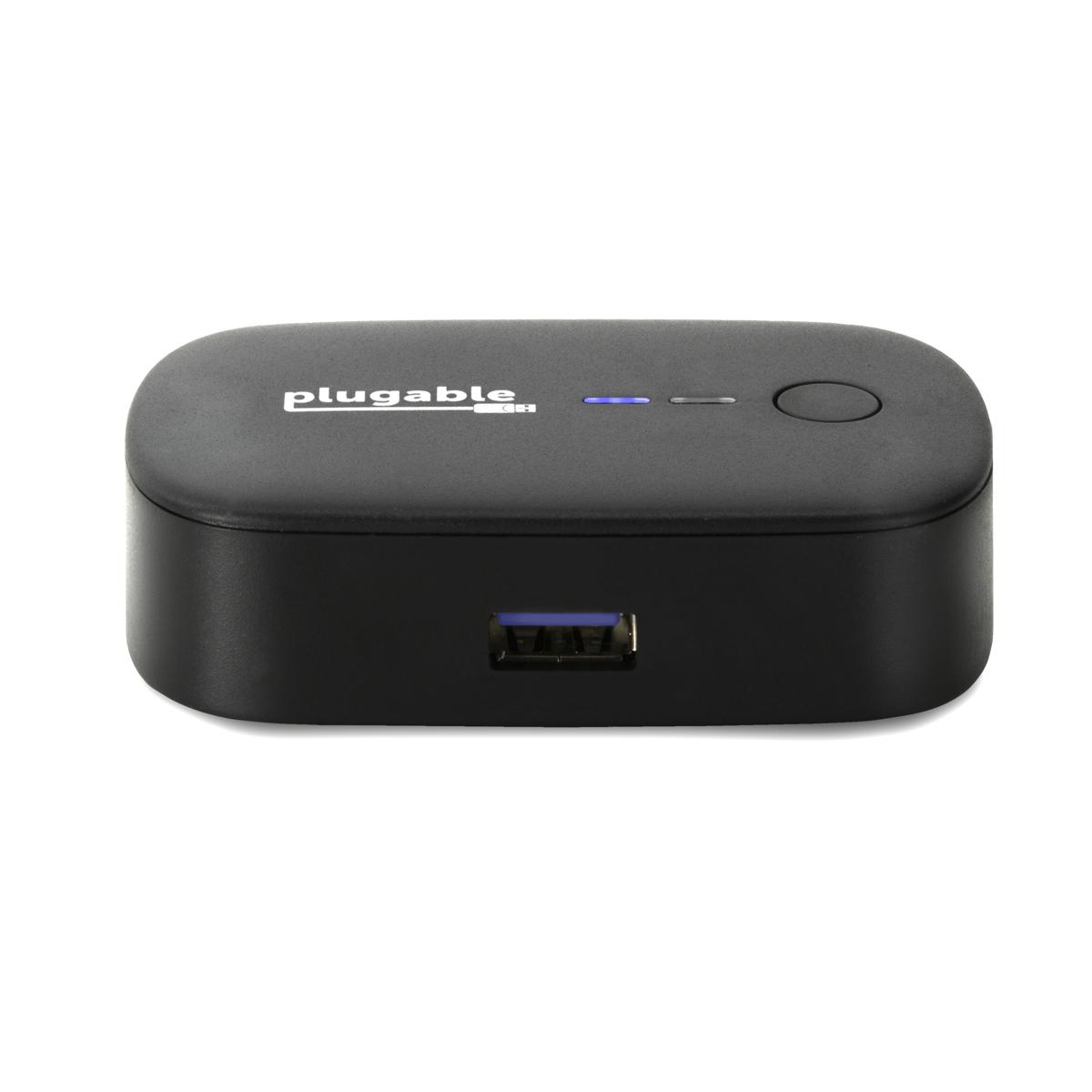 Sign up to be notified when we're back in stock!

Please note: Not all products are available globally